Belgian made cloth insignia are often referred to as being “Reitz made” insignia.

The E.Reitz factory however never produced any insignia herself. All insignia that were to be applied on the uniforms had to be supplied by the customer. In most cases this was the clothing office that issued the order for the production of a batch of uniforms. The German Army had many different of these clothing offices ( Heeresbekleidungsamt , Luftwaffe Bekleidungsamt , Kriegsmarine Bekleidungsamt ) and all the other paramilitary organisations had similar offices too ( Todt, NSKK, …) as did the collaboration organisations.

The area around Aalst ( Alost in french) was famous for it’s textile production before the war and they continued to produce during the war and are still doing so today.

One company named “Nominette” produced insignia for police, firefighters and civilian associations which were woven in a manner that it shows an almost perfect match with the well known war time Belgian made cloth insignia. We were able to receive the full history of the company with drawings and samples, but unfortunately the 4 war time years were – conveniently ? – missing due to bombardments during the liberation of Aalst in 1944.

Conveniently ? Because all companies producing and selling goods for the enemy were accused of collaboration and many suffered heavy penalties which often led to bankruptcy of the company concerned, not to mention imprisonment of it’s leadership. So there is no solid proof, but all facts and the production method of the insignia, point towards this company. 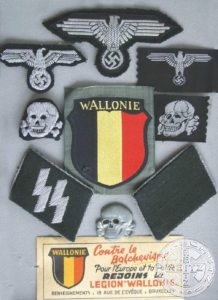 In the following sections we will cover in depth the different Belgian made cloth insignia.

Belgian made insignia in wear

Belgian made insignia on original uniforms or caps