History of the factory building in Merksem near Antwerp

The factory building in Merksem 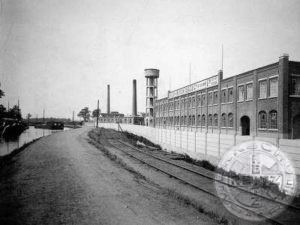 The factory as it was in 1925 when operating for the British American Tobacco Association. Note that the top levels weren’t added yet and Canal on the left was the Kempische Vaart, before it was widened and renamed in the Albert Canal !

The E. Reitz factory in 1941.  Clearly visible is the “E. Reitz” logo on the water tower on the left.

In the picture on the left we see the huge roof of the Antwerp sports palace in the center background. 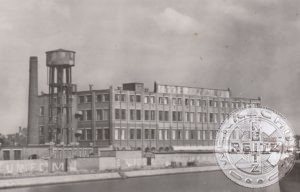 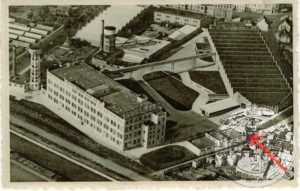 The factory as it appeared shortly after the war in 1947. The red arrow indicates the location of the main entrance gate.

The factory in 2004 with the Belga logo still on top. The  building with the many windows in the front of the left picture wasn’t present in the 1947 picture above.

In July 2005 Belga ceased all activities and the factory was sold.

In 2007 the buildings were to be destroyed for a further widening of the Albert Canal.

The main building on April 2nd 2007, just before the breakdown !

All signs of the tobacco company have been removed, the trees have been cut down.

The building with the many windows in the left picture has already been demolished.

The famous gate of the E. Reitz Uniformwerke main factory at Merksem. 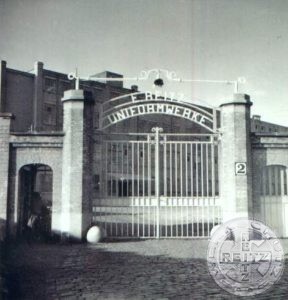 The main entrance gate of the E.Reitz Uniformwerke in  1944, the Albert Canal lies behind the building.

The same gate in 2004 with the logo “Vanderelst” right above the entrance and the “Belga” cigarette logo on top of the main building. 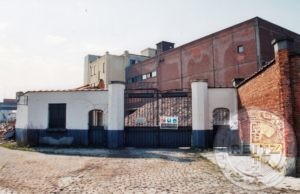 The “Vanderelst” logo has been cut in half, heaps of rubble are just behind the gate doors.

The buildings on the left are all gone. The rest of the factory was soon to follow !

The bell at the back of the entrance gate

The back of the gate in March 2007, before the demolition began. Note the bell on the left side of the gate. 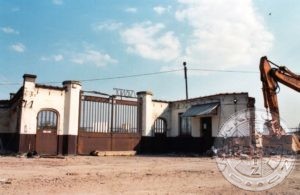 The back of the gate on April 2nd 2007 , the structure is almost demolished and the bell on the left has vanished !

Close up of the bell which found a new home in March 2013 among all the other E.Reitz Uniformwerke items !